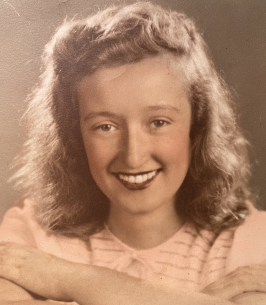 Kathleen Anne Durgin, the eldest daughter of Lucy and Joseph Mahoney, passed away on July 27, 2022, from complications resulting from a fractured hip. She was 92. Born and raised in Weymouth, MA., Kathleen was studious, popular with her classmates, and compassionate. While in high school she was instrumental in starting a volunteer group of fellow students, the “Busy Bees,” who performed charitable works in the community. When her sister Geraldine was diagnosed with brain cancer, she assumed considerable responsibility for her care.
While still in high school, Kathleen met Ralph T. Durgin at a friend’s party. A few years later they married and moved to the Chicago area, where Ralph, having joined the Coast Guard shortly after the end of World War II, was assigned as a cook aboard a light ship on Lake Erie.

Throughout her life Kathleen was a devoted homemaker and mother. Her husband and children were the loves of her life. Yet in her quiet way she always carved out time for reading and was a passionate lover of music and opera. She could recall in detail the plots of many operas, especially those by Verdi and Puccini. Her musical tastes also extended to popular artists—including Johnny Mathis! High on the list of her other notable interests were the Boston Red Sox: from childhood through her later years, she loved to attend games at Fenway Park.

As her youngest children reached their majority, she returned to school, earning Bachelor’s and Master’s degrees at Southern Connecticut State University. She was a talented researcher—her graduate advisor told her son David that she was his best student. She and Ralph, who became an Episcopal priest after a career as a computer programmer, traveled to Puerto Rico to research her Master’s history thesis, “Bishop Manuel Ferrando, Missionary and Apologist of Evangelical Christianity.” Her work was recognized as a notable contribution to the field of Episcopal Church history.

Kathleen and Ralph often vacationed on Cape Cod, their Shangri-la. They consummated a life-long dream when they retired there in the mid-1990s.

Kathleen is survived by her sister Mary Jane Wright; by her children, David Durgin (Elizabeth) of Bloomfield, CT, Geraldine Stinson (Everson) of Orrington, ME, Christine Durgin (Cindy) of Augusta, ME, and Mary Merly (Joseph) of Milford, CT; and by seven grandchildren and four great-grandchildren. They will all miss her warmth and kindness.

The family would like to thank Lisa Carroll, FNP, Kindred Hospice, and the kind staff of Woodlands Memory Care. Those who wish to are asked to make a contribution to St. Patrick’s Episcopal Church, 21 Holyoke St., Brewer, ME. 04412.

Condolences to the family may be expressed at BrookingsSmith.com

This obituary is protected by copyright by Brewer. Proudly Serving the Community of Brewer. Brewer is located in the state of Maine, United States.