To share your memory on the wall of Melvin T. McClure, Ph.D., sign in using one of the following options:

Provide comfort for the family by sending flowers or planting a tree in memory of Melvin T. McClure, Ph.D.

Provide comfort for the family by sending flowers or planting a tree in memory of Melvin T. McClure, Ph.D.

Mel attended Dover-Foxcroft schools until his beloved mother moved to Bangor. He graduated from Bangor High School where upon he joined the United State Navy and was stationed with the USS Storm that saw combat duty during the Korean War. Following his discharge he used a Steven’s Scholarship and his veteran’s benefits to continue his education, first attending the University of Maine, receiving his Bachelor of Science Degree in Accounting in 1957. Determined to further his education he went on to attend the University of Illinois at Urbana, receiving his Master of Science Degree in Accounting in 1960, followed by his Ph.D in 1968. Mel started teaching at the University of New Hampshire but the call from his beloved university was too strong, returning to the University of Maine where he was Professor of Accounting for the next 28 years. During his tenure at the University he received in 1967 the Nicholas Saigo Award, in 1991 the Steve Gould Award, followed by the prestigious Black Bear Award, all of which cited his devotion and loyalty to the university, the students, its ideals and highest traditions. Dr. McClure was involved in many activities outside of academics his entire lifetime, starting during his student years and continuing well into his retirement. As a student, Mel was a member of Tau Kappa Epsilon Fraternity, Phi Beta Kappa and Phi Kappa Phi Honor Societies. While being a Professor he participated in the following: honorary member UMAA Board of directors, treasurer of honor society Phi Beta Kappa, vice president of Phi Kappa Phi honor society, faculty advisor for UM Account Club, member Board of Trustees for UM Chapter of Tau Kappa Epsilon Fraternity in 1993. Mel served on the University Credit Union Board of Directors for 22 Years. One of his most significant civic contributions was his work in bringing the Volunteer Income Tax Assistance program (VITA), bringing the Chapter to UM in 1981. He was most proud of his tax assistance to the International students. He volunteered his time with his assistance well after he had retired to Florida with Jean, his wife of 31 years.

A funeral service will be held 11 am Tuesday, May 14, 2019 at Brookings-Smith, 133 Center Street, Bangor, with the Rev. Lorna Grenfell, minister of the Church of Universal Fellowship, Orono, officiating. Interment will be in Mount Hope Cemetery, Bangor. The family invites relatives and friends to share conversation and refreshments at the Family Reception Rooms of Brookings-Smith, 55 South Main Street, Brewer, following the services, Tuesday. Those who wish to remember Mel in a special way may make gifts in his memory to the Melvin T. McClure Scholarship Fund, c/o the University of Maine Foundation, Two Alumni Place, Orono, ME 04469 or online at umainefoundation.org/memorial. Condolences to the family may be expressed at BrookingsSmith.com.

We encourage you to share your most beloved memories of Melvin T. McClure, Ph.D. here, so that the family and other loved ones can always see it. You can upload cherished photographs, or share your favorite stories, and can even comment on those shared by others.

Guaranteed hand delivery by a local florist
B 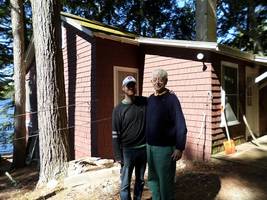 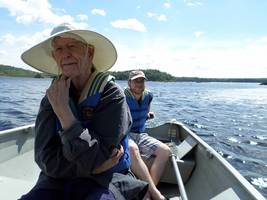