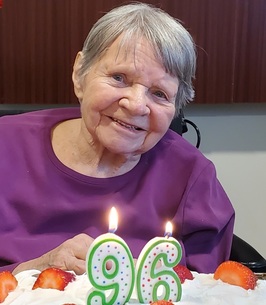 Cecile graduated from Sacred Heart School, Class of 1944, and St. Louis Hospital School of Nursing in Berlin, New Hampshire as a cadet nurse in 1947. She married Everett White on June 28, 1948 and raised five children while traveling around the world as he served 22 years in the Air Force. Cecile worked as a nurse for 15 years at the Eastern Maine Medical Center on the Alcohol Detoxification & Rehabilitation Unit and helped Dr. Stanley Evans extend the program to St. George. She finished her nursing career at Phillips-Strickland House, working there for 13 years until her retirement at the age of 80. With French as her primary language, Cecile would light up at the opportunity to speak it and often helped translate for French speaking patients. She was also a long-time member of the American Legion and Auxiliary Post 49 and the Women’s Council of Bangor.

Cecile had a love for travel and visited Newfoundland, Alaska, Hawaii, Kwajalein Island, Germany, London, Paris, Holland, Venice, Rome. Her last trip was to Alaska with her grandson Robert and his wife Wendy for her 80th birthday. She enjoyed collecting shot glasses, or “jiggers” as she called them, as souvenirs and proudly displayed her extensive collection.

Cecile was known fondly by most as “Grammie”, and her feisty spirit, sense of humor and ability to always speak her mind left a lasting impression on everyone who met her. She had an answer or comment for everything and gave it to you whether you wanted to hear it or not. Full of spunk and energy late into her retirement, she was always on the go. Expressing her love through acts of service, she was often serving those around her their favorite food or drink and sending you home with something even if you had declined. On the rare occasions she did sit down, she could be found in her chair reading a romance novel or enjoying her favorite soap opera, which she referred to as her “stories”. Though she will be missed by many, her legacy of strength, honesty and wit will be cherished by those who loved her.

Relatives and friends are welcome to call 5-7 p.m., Tuesday, July 26, 2022, at Brookings-Smith, 133 Center St., Bangor. A Mass of Christian Burial will be celebrated at 11:00 a.m., Wednesday, July 27, 2022, St. John’s Catholic Church, 217 York St., Bangor. The Rite of Committal will be at Mt. Hope Cemetery, Bangor, immediately following the service. The family invites relatives and friends to share conversation and refreshments at the Family Reception Center of Brookings-Smith, 163 Center St., Bangor, following the interment.