To share your memory on the wall of Rudolph Larez, sign in using one of the following options:

Rudy proudly served in the Army Air Corp, and the United States Air Force during WW II and the Korean War, stationed in Nome, Alaska, just 20 miles from Russian territory. He received medals for Good Conduct, Sharp Shooter, WW II Victory, National Defense, American Defense, Cold War Commemorative medal, and the USAF Commemorative Medal. Rudy received training on radar systems at Boca Raon, FL and Biloxi, MS, as well as MIT. He continued his work in the United States Air Force as a civilian for 28 years in the areas of radar design, maintenance engineering, and logistics. After his time in the Air Force he owned several of his own small businesses before retiring.

Rudy was a member of the Brewer Kiwanis International Club for 18 years, and served as an officer in all offices from Club Director to Distinguished President and Lieutenant Governor for Division 3 of the New England District. He also served as Chairman of the Brewer City Conservation Commission for 3 years and President of the Brewer Historical Society for 5 years. Rudy was an avid golfer and New England Patriots fan, and coached in Pee-Wee and Junior Baseball Leagues in his younger years.

In addition to his parents, he was predeceased by his wife, Jeanette Larez; siblings, Raymond Larez, Enedina Castaned, Tibursio “Bucho” Larez, and Olga Onsurez.

Funeral Prayers and the Rite of Committal will be held 1:00 p.m. Tuesday, June 2, 2020, in the Bangor Section of Mount Hope Cemetery, Severance St., Bangor. Those wishing to remember Rudy in a special way may make gifts in his memory to The Animal Orphanage, 71 Airport Rd., Old Town ME 04468. Condolences to the family may be expressed at BrookingsSmith.com.
Read Less

We encourage you to share your most beloved memories of Rudolph here, so that the family and other loved ones can always see it. You can upload cherished photographs, or share your favorite stories, and can even comment on those shared by others.

Posted Jun 06, 2020 at 06:07pm
So very sorry to lose such a wonderful man, I've known him and his wife since I was just a little kid. Rudy made me my first Chorizo Burrito and the love just grew from there. We've been friends throughout my entire adult life, chatting on the phone whenever possible and meeting up for lunch when I returned home to Maine. His smile, his laugh, his appreciation of his friends, everything about him sang something beautiful. He will be very much missed. I cheers to you Rudy with all my heart, every time I have a Margarita I'll think of you - and every moment in between. Hug Janet for me, do wonderful things up there my dear friend. XOXO always.

Posted Jun 01, 2020 at 04:45pm
I am thankful for the brief time I knew Rudy. God bless his family and heal their hearts.
Comment Share
Share via:
AS

Posted May 31, 2020 at 01:29pm
Rudy will be sadly missed by family and the many friends he had. In the past I spent many times with him and his" Net-Lee" camping, parties etc. We always had so much fun together. Rudy was also a most excellent cook and made many delicious Mexican meals. He lived a life to be proud of and leaves behind a wonderful legacy-- miss you Rudy- may you rest in peace. Anne Somers 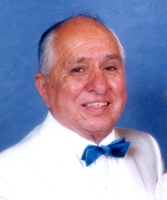