To share your memory on the wall of Robert Reynolds, sign in using one of the following options:

Provide comfort for the family of Robert Reynolds with a meaningful gesture of sympathy.

Bobby graduated from Hermon High School, class of 1966. His love for sports started at a very young age, especially basketball. He played 2 years of basketball at Husson College and played in 6 Eastern Maine basketball tournament games. While in high school he earned varsity letters in cross country, football, baseball, and basketball. In his later years, Bobby was dedicated to working with the homeless population, providing support and education, so individuals could move forward and live a happy life. He also enjoyed watching Jeopardy every night.

In addition to his parents, he was predeceased by his brother, Gary. He is survived by his daughters,
Julie Sleeper, and Karen Reynolds, both of Bangor; sisters, Dawn Demmons and her husband, Tom of Carmel, Susan Reynolds of Bangor, and Jolene Good of Orono; grandchildren, Alexandrea, Nikole, Quinlyn, and Ricky; a great-grandson, Koda; many nieces, nephews, and friends.

The family invites relatives and friends to a graveside service, 1pm, Saturday, August 24, 2019 at Snow's Corner Cemetery, Fuller Road in Hermon. Those who wish to remember Bobby in a special way may make gifts in his memory to the Hope House, 179 Corporate Drive, Bangor, ME 04401. Condolences to the family may be expressed at BrookingsSmith.com
Read Less

Posted Aug 21, 2019 at 04:14pm
Our heartfelt condolences on your loss. With deepest sympathy, Peter Wells and family.

Posted Aug 20, 2019 at 05:18pm
Dear Family,
It was with great sadness that I read The news about Bobby. I have known Bobby for many, many years from 8th grade to the present and had a chance to see him 2 weeks ago. He has been through a great deal in his life and he is now at peace. I will think about him often and remember all the great times.
Pat Martin
Comment Share
Share via:

Posted Aug 19, 2019 at 07:32am
Aww Dawn, Susan and Jolene, I am so sorry for your loss. I remenber being on Bobby's softball team many years ago. He was a winner. Hang in there ladies. Love you all.
Comment Share
Share via: 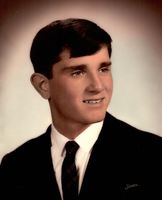