To share your memory on the wall of James Powers, sign in using one of the following options:

Provide comfort for the family of James Powers with a meaningful gesture of sympathy.

James graduated from John Bapst Memorial High School, Class of 1976. Following graduation, he worked for Eastern Maine General Hospital in the Material Handling and Purchasing Department. James was an exceptionally talented artist who began oil painting shortly after high school. After James lost his vision, he went to the Maine Center of the Blind, where he later became a board member. James’s disability was not going to slow him down, and years later, he enrolled at The University of Maine, graduating with a B.A. Degree in Human Services, where he was recognized as student of the year. He continued his passion for painting, earning the distinction of having his artwork on display at the Farnsworth Art Museum in Rockland, the Portland Museum of Art, the Museum of Fine Arts in Boston, and the Art Institute of Chicago. James was a longtime parishioner of St. Mary’s Catholic Church in Bangor. He also enjoyed Red Sox baseball, a passion that he developed early in life from his Grampie Jim.

In addition to his parents, James was predeceased by a sister, Mary-Ellen Powers, and an infant identical twin, John. He is survived by many many friends.

Relatives and friends are welcome to call 5-7 p.m., Thursday, August 22, 2019, at Brookings-Smith, 133 Center Street, Bangor. A Funeral Mass will be held 11 a.m., Friday, August 23, 2019, at St. Paul the Apostle Parish, St. Mary’s Catholic Church, 768 Ohio Street, Bangor. All are welcome to share conversation and refreshments in the parish hall immediately following the Mass, Friday. Private interment will be in Mount Pleasant Catholic Cemetery, Bangor, at a later date. Those wishing to remember James in a special way may make gifts in his memory to the St. Jude Children’s Research Hospital, 501 St Jude Place, Memphis, TN 38105. Condolences to the family may be expressed at BrookingsSmith.com
Read Less

We encourage you to share your most beloved memories of James here, so that the family and other loved ones can always see it. You can upload cherished photographs, or share your favorite stories, and can even comment on those shared by others.

Posted Aug 22, 2019 at 10:41am
I met Jim in 1997 and he has been part of life ever since. Glen and I met in 1996, and Jim was his best friend. They would talk on the phone repeatedly for hours. I was not and have never been much of a talker, but how they found things to talk about for long periods amazed me ... always laughing and opinionated in a way that they understood each other. I was glad though, for it gave me some me-time when Glen got on the phone with him. Same thing when we'd visit, they'd talk talk talk ... I'd just silently sit to the side, but loving watching them talk talk talk ... although Jim always tried to bring me in to their conversation...lol. Jim loved life and lived it! He had stories galore and my goodness, just remembered EVERYTHING in detail ...names, time of day, dates, colors, weather, etc. Wow! One time Jim, Glen and I made a weekend trip to Quebec City. Being a Texas boy, I was amazed with the foliage of Maine and New England. Jim never let me forget how I was at this trip ...always would say to me "Alex, I'll never forget how you made Glen stop during that car trip up to Quebec ... every time you'd see a body of water or a stream of water trickling down the side of the mountain, you'd ask Glen to stop to take pictures! That was the longest trip I ever took by car because you couldn't get enough of the scenery!" He was so funny to never let me forget that. Jim was always there and was my one of my dearest and strongest supporters to me, when Glen was in the hospital in Baltimore. Losing Glen hurt him so and that is when I built the loving friendship he and I eventually developed. ...and yes, I'd call him about every two weeks and it became our thing ... thanks to Jim's stories, I finally understood how it was easy to have long conversations with him. I will miss those phone calls! Jim always asked about my family in Laredo Texas, and my parents always asked about him. Jim loved visiting them one summer and he always asked about them. Jim was just full of love, life and laughter. I'm going to miss you my dear friend. My heart is broken once again, but it consoles me to know you are no longer in pain and that you are again reunited with your best friend, my loving Glen. I smile knowing the two of you are together again and I know you are my angels up in heaven watching over us. God is with you and you are in his glory ... likely talking away and thanking him for the great life you lived. God Bless everyone! ...Live life, Laugh and Love all! (enjoy the pictures I posted)
Comment Share
Share via:
CV

Your pictures are great and he talked about you and Glen a lot to all of us. You all gave him much joy, thank you.
LG

Posted Aug 19, 2019 at 09:58am
I remember Jim, exactly, as the picture shown. I can see his kind and gentle face, because that is what he projected. I had the mass on Saturday offered for his soul and I will set another five in the following Saturday’s . He is with our beautiful Glen, enjoying eternity without pain and suffering. He is at peace resting in Our Lords arms. Sara Chavarria
Comment Share
Share via:
AR 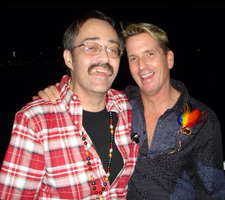 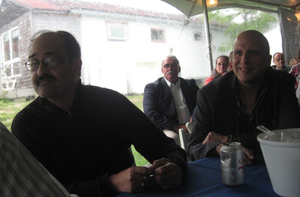 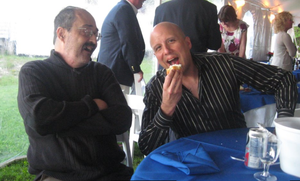