To share your memory on the wall of Margaret (Nee Muller) Baillie, sign in using one of the following options:

Margaret attended the Cambridge School in Weston, Massachusetts and Smith College in Northampton Massachusetts. She worked for the International Ladies Garment Workers Union in Boston and was politically active in advocating for the rights of garment workers. She worked tirelessly her entire adult life for causes that supported human rights, women’s rights, worker’s rights, social justice, tolerance, peace initiatives and civil rights. She was well known in Bangor, and elsewhere in Maine, for her involvement with many civic organizations. She served on the boards of the Bangor Area Homeless Shelter, Community Health and Counseling Services and PICA (Power in Community Alliances) and was an active member of the Shakespeare Club, and PEO Chapter A (Philanthropic Educational Organization) among other organizations. In 2004 she was honored with the prestigious “2 Those Who Care” Award sponsored by the United Way and WLBZ, honoring outstanding volunteers dedicated to the community. She was a member of All Souls Congregational Church for over 30 years and in 2009 she was recognized by All Souls with the Mandatum Dignitatus award for service to Church and Community. In 2012 Margaret received the Maine Initiatives Watering Can Award, honoring “inspiring activists for racial justice and equity in Maine”.

In addition to her civic endeavors and political and social activism, Margaret was an avid reader and enjoyed keeping up with current events. She was equally at home on a march for the homeless as she was in an elected official’s office urging action on one of her causes. She enjoyed the outdoors and participated in cross country skiing, cycling, kayaking and swimming well into her 80’s.

In the 1970s Margaret and Arlan lived in Worcester, Massachusetts where Margaret, along with Sister Annette Rafferty, a local activist, founded Abby’s Place, a non-profit organization which provided shelter, affordable housing and advocacy for homeless, battered and low-income women. Prior to moving to Bangor in 1986 she and Arlan lived in Pocasset, Massachusetts where they enjoyed sailing their sailboat, named “Eroica” after Beethoven’s 3rd symphony, on Buzzards Bay. She shared her husband’s love of music and belonged to the Bangor Symphony, where her husband served on the Board of Directors. They spent a month in London for several years attending the symphony, opera and ballet nearly every day.

A memorial service will be held 11:00 AM Monday, October 14, 2019 at All Souls Congregational Church, 10 Broadway, Bangor with the Rev. Chad L. Poland, pastor and teacher, officiating. The family invites relatives and friends to join them in celebration of Margaret’s life in the church vestry following the service. Interment at Mt Hope Cemetery, Bangor will be private. Those who wish to remember to Margaret in a special way may make gifts in her memory to the Memorial Fund of All Souls Congregational Church or to the Bangor Area Homeless Shelter, 263 Main Street, Bangor, ME 04401. Condolences to the family may be expressed at BrookingsSmith.com.
Read Less

We encourage you to share your most beloved memories of Margaret (Nee Muller) Baillie here, so that the family and other loved ones can always see it. You can upload cherished photographs, or share your favorite stories, and can even comment on those shared by others.

Posted Oct 05, 2019 at 05:16pm
To Carol Austin and the rest of Margaret's family, I simply want to say how sorry I am for your loss. Margaret was an important person in my life and offered me love and support throughout our almost 20 years' association with the Bangor Area Homeless Shelter. She was kind, passionate, and principled. She was of an age that also produced my mother who also died recently. I am thankful for having known Margaret, and I am certain fond memories will be available to you all.
In peace, Dennis Marble
Comment Share
Share via: 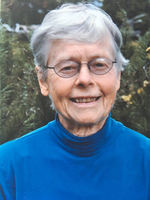