To share your memory on the wall of Thelma Preble Merritt, sign in using one of the following options:

Thelma taught second grade elementary school for 26 years in Presque Isle and retired in 1980. She then worked as an assistant librarian for 10 years retiring in 1990 and relocating to Bangor.
Thelma was a longtime member of Grant Memorial Methodist Church in Presque Isle and later transferred to First United Methodist Church of Bangor. Church has always been an anchor in her life and she has many dear friends there.

She was a 50 year member of Delta Kappa Gamma International Society, Alpha chapter. Delta was so important in Thelma’s life. She was a member of UMW, NEA, MEA, and Penobscot Retired Teachers.

She also leaves her two nephews, Gary Smith and Richard Grotton and his wife Barbara, daughter-in-law Faith Rawding, and dear friend Linda Morris who have all given her much love and support.
Our heartfelt thanks go out to all her friends including the staff at the Phillips Strickland House where she has had a wonderful home for 10 years.

Relatives and friends are invited to call 2-4 pm Thursday, April 29. 2021 at Brookings-Smith, 133 Center St., Bangor, where a funeral service will be held 1 pm. Friday April 30, 2021, with Dr. Steve Smith, pastor of the First United Methodist Church, Bangor and the Corinth United Methodist Church, officiating.
Interment will be in Fairmount Cemetery, Presque Isle later in May.

Those wishing to remember Thelma in a special way may contribute in her memory to the First United Methodist Church, 703 Essex St., Bangor, ME. 04401.

Those wishing to leave a condolence or view a tribute of the service may do so by visiting BrookingsSmith.com.
Read Less

We encourage you to share your most beloved memories of Thelma Preble here, so that the family and other loved ones can always see it. You can upload cherished photographs, or share your favorite stories, and can even comment on those shared by others.

Ralph and Chris Delano sent flowers to the family of Thelma Preble Merritt (Preble).
Show you care by sending flowers

Posted Apr 29, 2021 at 08:04am
I wanted to express my sincere condolences to my classmate Wayne and the rest of the family, but I am also happy to know that Mrs. Merritt lived such a productive and fulfilled life after retirement. May we all have that energy and will to help to age 100 and beyond.
Comment Share
Share via:
DL

Posted Apr 27, 2021 at 01:00pm
My family and I send our deepest condolences to the family of Thelma, one of the nicest and dearest people I've ever had the privilege of knowing. Since the beginning of my teaching career at the Training School to Presque Isle High School activities with Barbara, David, and Wayne, It seems like the Merritt Family has always been a part of mine. When I started playing the organ at the Methodist Church our acquaintance was once again renewed. I'm so sad at her passing, but also happy that I could call her and her family my friends. Daniel Ladner
Comment Share
Share via:
RD 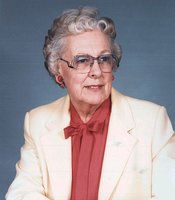