To share your memory on the wall of Paul Dempsey, sign in using one of the following options:

Provide comfort for the family of Paul Dempsey with a meaningful gesture of sympathy.

Paul led a miraculous life. He contracted osteomyelitis before his third birthday and was not supposed to live past four years of age. Due to the dedication of a young intern, four years in the hospital, and multiple groundbreaking surgeries, his life, and the afflicted leg were spared. He became a born again Christian as a young teen and this shaped everything he did for the rest of his life. While supporting his family as a machinist at 12 years old for Jerome Engineering (later foreman) he went on to graduate from Burncoat Senior High School in 1949, and then on to Worcester Trade School in 1950. After graduating from the Monotype school in Philadelphia, PA in 1950 as well, he worked for Jerome Engineering again due to heavy war work and the necessity for skilled, experienced personnel. He then worked as an industry troubleshooter for the Governor’s office of the State of Maine. It was also during this time in 1953 he married his wife, Gloria L. Dempsey (nee Hippert) to whom he remained married until her death in 2017. Because of his expertise in the printing field he was drafted and received a Presidential waiver (due to osteomyelitis) from then President Dwight Eisenhower and served in the U.S Army from 1954-1956 during the wind down of the Korean Conflict. He worked in various positions over the next several years until starting his own machinery business to the printing industry, Mono-Print, which he operated until his retirement in the early 90’s. He was a member of the American Legion and VFW.

In addition to his parents, he was predeceased by his wife and all of his siblings.

He is survived by his son Paul E. Dempsey Jr., his daughter-in-law, April M. Dempsey, both of Hudson; granddaughters, Anna and Elizabeth. In addition he is survived by a extended family to include multiple nieces, nephews, and children of same, not to mention the many “adopted” friends that he mentored and impacted in innumerable ways.

Relatives and friends are welcome to attend a memorial service to be held on Friday, October 11th at 11 A.M. at Faith Baptist Church, 160 Forest Avenue, Orono ME 04473 where he was a member of many years with a reception to follow. A short burial service will be held at Togus National Cemetery, Togus ME on Wednesday, October 16 at 10A.M. Those who wish to may make gifts in his memory to the Maine Veteran’s Home, 44 Hogan Rd, Bangor ME 04401 or with the Gideon’s International on their website.
Read Less

We encourage you to share your most beloved memories of Paul here, so that the family and other loved ones can always see it. You can upload cherished photographs, or share your favorite stories, and can even comment on those shared by others.

Posted Oct 08, 2019 at 08:35pm
Paul- I am so sorry to hear of your Dad's passing. He was always very pleasant when I saw him at the Town Office. You are all in my thoughts and prayers.
Comment Share
Share via:
PD

Thank you Maureen. I miss you not in the town any more.
PD

PLEASE BE ADVISED I MISTAKENLY PUT 10 AM FOR THE MEMORIAL SERVICE ON THE 11TH. THE CORRECT TIME IS 11 AM. Thank you.- Paul Jr. 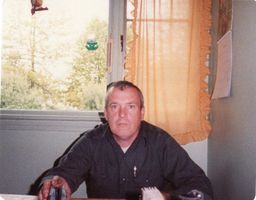