To share your memory on the wall of Walter Kelley, sign in using one of the following options:

Walter attended Bangor schools. Walter served in the U.S. Army in Korea with the 8th Cavalry 1st Cavalry Division and the 5th Infantry Division at Fort Carson, Colorado. After returning from Korea, Walter went to work for Eastern Fine Paper as a member of the United Steel Workers Union where he retired after 40 years of service.
Walter enjoyed politics, sports, and gardening. He was an avid fan of the Boston Red Sox, Celtics, and Patriots. In the summer Walter always had a lush and full vegetable garden. Walter also loved living on Brewer Lake with Amy and Lance. He enjoyed watching the birds on his feeders as well as all the activity on the lake. He stated, “This is right where I want to be.”

In addition to his parents, he was predeceased by his sisters, Elizabeth Lowden, and Hazel M. Hart. He is survived by his daughter, Amy M. Lord and husband, Lance of Orrington; his sister, Charlotte Burrill and husband, John of Trenton; step-children, Elisa Dunfee of Brewer, Billy Sealy of Bangor, Cheryl Palman of Belgrade, and Deborah Speirs of Bangor; along with their spouses, children and grandchildren.

Relatives and friends are welcome to a celebration of life 1-4 p.m., Sunday, July 12, 2020, at Jeff’s Catering, 15 Littlefield Road, Brewer. Interment will be in Ridge Road Cemetery, Bowdoinham, at a later date. Those wishing to remember Walter in a special way may make gifts in his memory to the Maine Veterans’ Home, 44 Hogan Rd, Bangor, ME 04401. Condolences to the family may be expressed at BrookingsSmith.com
Read Less

We encourage you to share your most beloved memories of Walter here, so that the family and other loved ones can always see it. You can upload cherished photographs, or share your favorite stories, and can even comment on those shared by others.

Posted Jul 03, 2020 at 08:20am
I’m I honored to have known such a wonderful talented man. Walter put up with Amy and me (our shenanigans) all through High school!!! He could anything from Cane a chair to making the most amazing pizza I have ever had! Heck, he even has a worm farm lol!
Rest well Walter, I love you 💕
Comment Share
Share via:
D

My thoughts and prayers for the family ,, he was a nice men ,,, 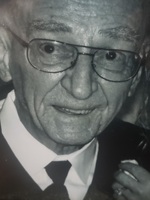