To share your memory on the wall of Woodrow W. Cross, sign in using one of the following options:

Provide comfort for the family by sending flowers or planting a tree in memory of Woodrow W. Cross

Provide comfort for the family by sending flowers or planting a tree in memory of Woodrow W. Cross

Print
Woodrow Cross died peacefully on July 26, 2020, at the age of 103 surrounded by his family near his hometown of Bangor, Maine.

He was born more than a century ago in December 1916 on a small farm in Bradford, Maine. Woodrow’s entrep... Read More
Woodrow Cross died peacefully on July 26, 2020, at the age of 103 surrounded by his family near his hometown of Bangor, Maine.

He was born more than a century ago in December 1916 on a small farm in Bradford, Maine. Woodrow’s entrepreneurial spirit was apparent at an early age when he sold seeds door to door to other farmers at the tender age of six. As a teenager he raised and sold chickens. He could remember his hometown before electricity, the first telephone, or paved roads were introduced to the area. He attended a one room schoolhouse and spent time as a young man working in his father’s general store.

Woodrow’s grandfather fought in the Civil War and military service was always important to him. His turn came when the US entered WWII. He served in the United States Army and was deployed to the Pacific where he spent three years fighting against Imperial Japan in campaigns in New Guinea and the Philippines, and later performed occupation duty in a defeated Japan. Throughout his life he remained proud of his country and his military service. He enjoyed marching in the Memorial Day Parade in Bangor for many years including 2017 when he was 100 years old.

In September 1943, during the war, Woodrow married his sweetheart, Janette Bean, of East Corinth, Maine. After the war ended, Woodrow and Janette settled down in Bradford where they operated the general store begun by Woodrow’s father in 1929. And, they began to raise a family.

In 1954, Woodrow moved his young family to Bangor where he was determined to start a new business selling insurance. He started the company at his kitchen table, and worked from home for the next nine years, until he hired his first employee and moved from his home to an office in downtown Bangor.

Woodrow’s life was marked by his strong work ethic. In the early days of Cross Insurance, he worked nights building the “old” Bangor Auditorium where it was his job to keep the salamander heaters going to be certain the new concrete set properly. Decades later, when that auditorium was torn down, it was replaced by a new building with his name on it.

Woodrow had a true love for his work. He built Cross Insurance into the largest independent insurance agency in New England and one of the largest in the nation. As a businessman, he prided himself on running a large agency that prioritized customer service. He was also quick to adapt to new technologies and industry automation and relished going to work every day with his sons Royce and the late Brent Cross and grandsons Jonathan and Woodrow II. The family business has now grown to 1,000 employees in over 40 locations across eight states.

Woodrow was a longtime supporter of countless Maine charities and was the recipient of several awards and special recognitions including an honorary Doctorate of Business Administration from Husson University, Junior Achievement Maine Business Hall of Fame, the Key to the City of Bangor, and the prestigious Norbert X. Dowd Award from the Bangor Chamber of Commerce.

As his business grew, he remained anchored by his family and his faith. At the time of his death he was the oldest member of Calvary Baptist Church in Brewer where he was a member since 1954. Woodrow served his church as the treasurer and an usher, and for many years he enjoyed attending a weekly men’s Bible class.

He was the loving husband of Janette Bean Cross, his wife of 48 years before her passing in 1992. He was also predeceased by his son Brent Cross of Bangor, father Melvin Cross and mother Mabel Speed Cross, brother Leon Cross and sister Lula Cross Zinni.

“I have fought a good fight, I have finished my course, I have kept the faith: Henceforth there is laid up for me a crown of righteousness, which the Lord, the righteous Judge, shall give me at that day: and not to me only but unto all them also that love his appearing.” II Timothy 4:7 & 8

A private graveside service will be held for the family. The family suggests that donations in Woodrow’s memory may be sent to: The Building Fund of Calvary Baptist Church, 61 State Street, Brewer, Maine 04412 or to The Brent Cross Scholarship Fund, c/o Husson University, 1 College Circle, Bangor, Maine 04401. Condolences to the family may be expressed at BrookingsSmith.com.
Read Less

We encourage you to share your most beloved memories of Woodrow W. here, so that the family and other loved ones can always see it. You can upload cherished photographs, or share your favorite stories, and can even comment on those shared by others.

Posted Jul 31, 2020 at 02:09pm
We wish Woodrow's family to know he had a big impact on people he may have never met, in particular our Plymouth Rock team. With sincere sympathy, from Bill Martin and the Plymouth Rock Home Assurance Team
Comment Share
Share via:
HS

Posted Jul 31, 2020 at 01:05pm
We wish Woodrow's family to know he had a big impact on people he may have never met, in particular our Plymouth Rock team. With sincere sympathy.

Flowers were purchased and a memorial tree planted for the family of Woodrow W. Cross. Send Flowers

Posted Jul 30, 2020 at 01:40pm
To the Cross Family,
Karen and I were very sorry to here of your loss. Woodrow was a shining example of a God Serving man who showed other men to God. He was an incredible family and business man. All of these things showed us who knew him that you can make a difference with your own life through faith. We have been thinking of you and you are in our prayers.
Ken Hartt
Comment Share
Share via:
L

Posted Jul 29, 2020 at 03:40pm
My condolences to Woodrow's family. My first car insurance was with Woodrow right there in the bldg. with the Bangor Daily News these days/. Best to all.
Comment Share
Share via:
HS

Posted Jul 29, 2020 at 11:00am
With heartfelt condolences, we are thinking of you and your extended family at this difficult time. Warmest regards, Peter, Ashley & Jen (Maine & Co.)

Flowers were purchased for the family of Woodrow W. Cross. Send Flowers 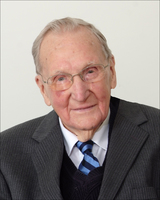