To share your memory on the wall of Paul Bodge, sign in using one of the following options:

Print
Hampden – Paul W. Bodge, 96, passed away at his home, surrounded by family and hospice staff. He was born June 21, 1924, in Bangor, the son of James and Catherine (Locke) Bodge.

He was married to the love of his life for seventy two ye... Read More
Hampden – Paul W. Bodge, 96, passed away at his home, surrounded by family and hospice staff. He was born June 21, 1924, in Bangor, the son of James and Catherine (Locke) Bodge.

He was married to the love of his life for seventy two years, Mary (Brangwynne) Bodge. He was very well known for playing semi-professional baseball in the Bangor area for the Bangor A.C.’s. Many locals came to see him play, and a sports writer for the Bangor Commercial wrote that he expected him to make the Major Leagues. He was known to hit many a ball over rooftops at Hayfords field that were legendary.

Paul worked for the Bangor Public Works, retiring in 1986. He loved his family, his cats, baseball, and outings to Dunkin and McDonalds. Paul also enjoyed gardening until he was no longer able to do so. Paul was a very hard worker, and built his own house with his wife, even hand digging his basement.

In addition to his parents, he was predeceased by his daughter, Katherine; sisters, Marion Richards, Frances Lambert; brothers, Leslie and James Bodge.

The family would like to thank his nurses, Lisa, Kathy and Kristen, and his home health supporters, Jen and Diane. Special thanks to John Condon for building ramps and ground maintenance to help keep Paul at home.

Those who wish to remember Paul in a special way may make gifts in his memory to Forgotten Felines of Maine, 499 Broadway #151, Bangor, ME 04401.

Services will be private for immediate family. Condolences may be expressed at BrookingsSmith.com.
Read Less

We encourage you to share your most beloved memories of Paul here, so that the family and other loved ones can always see it. You can upload cherished photographs, or share your favorite stories, and can even comment on those shared by others.

Plant a Tree in Memory of Paul
Plant a tree 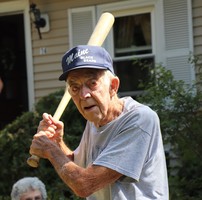