To share your memory on the wall of Betty Solórzano, sign in using one of the following options:

Betty attended Bangor public schools and graduated from Bangor High School with the Class of 1940. Always athletic, she attended and graduated from Bouvé College in Boston, Massachusetts, which offered a three-year program for women who wanted to teach physical education. Study involved learning the rules and how to teach 20 different sports! Despite being just 62 inches tall, Betty adored basketball and after college enjoyed playing a year of semi-professional basketball in Jackson, Mississippi. “I got it out of my system,” she would say. Needing to earn more money than semi-pro ball provided, she returned to Bangor and taught girls physical education at Garland Street Junior High School (now William S. Cohen Middle School). For many years, she also coached girls varsity high school basketball teams.

In addition to teaching, Betty served as water safety instructor at the Bangor YMCA. It was while working at the Y that Betty met the new fencing instructor who was living there, Alejandro Solórzano, who had just emigrated from Ecuador. The couple wed on September 29, 1950. They were married for 53 years until Alejandro's death in December, 2003.

Betty left teaching to raise her daughters, Lucia and Carmen, but returned to Garland Street when they were older. She never stopped teaching swimming, however, and taught generations of young people, and later their children, how to swim and often become swim instructors themselves. For nearly 50 years, Betty served as a swim official and diving judge at competitive meets throughout Maine. The Maine State Principals Association honored her with its Outstanding Achievement Award in 1982. In 2004, she was inducted into the Maine State Swimming and Diving Hall of Fame for her dedication to the sport. Betty retired from volunteering as a swim official the winter before she turned 90.

Betty's love of the outdoors drew her to Girl Scouting. When she was 21, she served as trip counselor at Camp Natarswi, the Abnaki Council Girl Scout overnight camp, week after week leading campers up, over, and safely back down Mt. Katahdin. She later served as director of Camp Mary Lou, a Girl Scout day camp on Eddington Pond.

Through Betty's work in physical education, swimming and Girl Scouting, she dedicated her life to improving the lives of youth in Bangor. Rest well, Betty, you deserve it.

Betty was predeceased by her parents; her husband; her sister, Patricia Rowland; and her brother, Robert J. Day. She is survived by her daughter, Lucia Solórzano Work and husband, Clem, of Missoula, Montana; three grandchildren, Alyssa Work and husband, Alex Friedman and daughter, June of New York City; Brendan Work and wife, Jessi Cahoon, and sons, Evyn and Everett, of Missoula, Montana; and Cecily Skye, husband, Louis Lanza, and children, Claire, Zoe, Andrew, and Morgan, of Montrose, California.

She also is survived by her daughter, Dr. Carmen Solórzano of Boston, Massachusetts; four nieces, Valerie Paquette of Shrewsbury, Massachusetts, Prudence Bradford and husband, Ronald of The Villages, Florida; Diane Cupps and husband, Dennis of Dixmont; and Patience Thibodeau and husband, Joel of Bangor; a nephew, Robert Day and wife, Margie of Exeter, and many great nieces and nephews.

A private interment has already been held at Pine Grove Cemetery, Bangor. A memorial service to celebrate Betty's remarkable life will be held in summer 2021. Heartfelt thanks go the wonderful team of caregivers who enabled Betty to spend her final years in her beloved childhood home. Friends who wish may donate in Betty's memory to the Bangor Humane Society, 693 Mt. Hope Ave., Bangor, Maine, 04401. Condolences to the family may be expressed at BrookingsSmith.com
Read Less

We encourage you to share your most beloved memories of Betty Solórzano here, so that the family and other loved ones can always see it. You can upload cherished photographs, or share your favorite stories, and can even comment on those shared by others.

Posted Mar 01, 2021 at 05:09pm
My condolences to the family. Betty made a lasting impression on me as I became a lifeguard and took my WSI training from her in the 1970s. I worked for her at the YMCA summer day camp. She taught me much and gave me confidence as a young teenager. I remember being comfortable asking her questions about teaching, and much of what she had to say encouraged me to become one. I appreciate all of her efforts in and think about how many of us she influenced in a positive way.
Betty Constantine Floris
Comment Share
Share via:
JK

Posted Mar 01, 2021 at 09:11am
My favorite teacher of all time; appreciated supporter of Bangor Y Girls swim team and respected role model. Condolences to family.

Posted Feb 27, 2021 at 12:21pm
My condolences to the family of Betty. Years ago I took the excellent water safety instructor course from Betty(my daughter also took it years later) at the Y. Betty’s great teaching has been a life long useful skill. I was a waterfront swimming instructor at Camp Mary Lou and a volunteer swimming instructor on Saturdays during my high school years at the Y. I cherish many great memories of Betty, Alejandro, Carmen,and Lucia during that time. Fondly, Frances Doane Verow , Brewer, ME
Comment Share
Share via:
SD

Posted Feb 27, 2021 at 06:18am
This world has lost a very special woman. I worked for her at camp Mary Lou in the late 50's including caring for Lucia and Carmen there. My most sincere condolences . Sharon Dauphinee (Daffy) .
Comment Share
Share via: 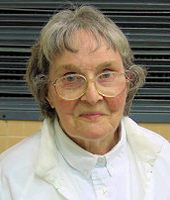