To share your memory on the wall of David Smith, sign in using one of the following options:

Bangor- David Eric Smith 57, won his battle against Progressive Supranuclear Palsy on Sunday, May 2nd as he is now in the presence of his Lord. Born February 13, 1964 to Warren E. and Joanne Smith. David grew up in Ban... Read More
David E Smith

Bangor- David Eric Smith 57, won his battle against Progressive Supranuclear Palsy on Sunday, May 2nd as he is now in the presence of his Lord. Born February 13, 1964 to Warren E. and Joanne Smith. David grew up in Bangor with his brother Mike and sister Terri. He graduated from Bangor Highschool in 1982. He married Tracey Smith in 1999 and they have one son Eric.
David had a passion for all sports, he played softball and coached for many years with the church softball league. He enjoyed coaching his son, Eric, through his early years in baseball and football.
He was a faithful member of Columbia St. Baptist Church serving as a deacon and helped with many church functions.
David had a strong work ethic and was proud to say he worked for 23 years at EMMC. He also enjoyed working at the Bangor Auditorium and the Cross Center, and later on at the waterfront concerts
Many people considered David a great friend, and David was always ready to help any of them at anytime. Many of these friends have been helpful and kind to David's family while David has been ill.
David is survived by his devoted parents, his wife Tracey, and son Eric, a brother Mike of Bangor, a sister Terri and husband Russ of TN.; nephews, Colby Smith (Firishta), Jonathan (Callie) and Ryan Barrett and nieces Morgan Leathers (Scott) and Sara Barrett; and one grand nephew, Cairo Smith.
A funeral service will be held at Columbia Street Baptist Church Saturday May 8th at 2 PM. with the Rev Scott McPhedran officiating. Reception immediately following.
The family would like to thank all caregivers David's behalf Jacob McKay, Morgan Leathers and NL hospice.
The family also requests donations be made to Cure PSP 1216 Broadway FL 2 New York, NY 10001 In David's memory.
Condolences to the family may be expressed at BrookingsSmith.com.
Read Less

Print
A funeral service will be held 2 pm Saturday May 8, 2021 at Columbia St. Baptist Church, followed by a reception there at the church.

We encourage you to share your most beloved memories of David here, so that the family and other loved ones can always see it. You can upload cherished photographs, or share your favorite stories, and can even comment on those shared by others.

Posted May 12, 2021 at 04:22pm
So sorry for this loss. Enjoyed knowing him and his family. We had great times on the softball team. Hugs and prayers to all.
Comment Share
Share via:
HW

Posted May 08, 2021 at 03:27am
Warren, Joanne, Terri and Mike-
I send my prayers for comfort to our Heavenly Father for you all.
Hal Wheeler
Comment Share
Share via:
MD

Posted May 04, 2021 at 02:29pm
My heart is with you all. Davey was a wonderful addition to the world. I am very sorry he had to suffer so much. I know you went through it with him and pray for rest and comfort to your souls. Love and hugs to you. Mary Davis

Posted May 04, 2021 at 10:12am
To Dave's family:
I worked with Dave through the years at EMMC in Outpatient. He was willing to help and was a great teacher of the equipment we used. He always treated me with respect. My most sincere condolences to his family. God Bless.
Michelle Warhola
Comment Share
Share via: 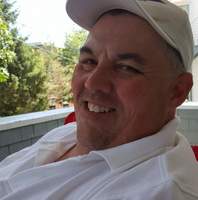