To share your memory on the wall of Robert \"Bob\" Oglesby, sign in using one of the following options:

Print
Robert “Bob” Oglesby was a distinguished scientist, loving father, and doting grandpa. Bob passed unexpectedly on March 31st, 2021 at the age of 67. He was at his happiest place on earth, his home on the island of Utila, Honduras.

... Read More
Robert “Bob” Oglesby was a distinguished scientist, loving father, and doting grandpa. Bob passed unexpectedly on March 31st, 2021 at the age of 67. He was at his happiest place on earth, his home on the island of Utila, Honduras.

Bob was born in New Jersey to James and Kathleen Oglesby on June 10th, 1953. He attended Case Western Reserve University in Cleveland, Ohio, and McGill University in Montreal, Canada. He then proceeded to spend a good part of the next decade traveling across Canada, the United States, Central America, and Colombia. It was on his second trip to Central America in 1975 that he first visited Utila. In the summer of 1978, Bob met Susan Reinherz whom he married in the fall of that year. They then moved to Maui, Hawaii where he lived for the next four years.

Bob went on to enroll at the University of California, Davis, where he received a Bachelor’s in Physical Geography in 1985. He then attended graduate school at Yale University where he earned a Masters in 1987 and his Ph.D. in 1990 in Geophysical Fluid Dynamics. His primary research interests were devoted to understanding the impact of climate change, past, present, and future. By this time Bob was already an internationally recognized climate modeler.

Bob did a short post-doctorate at Yale with his Ph.D. dissertation advisor, Barry Saltzman, before moving on to post-doc with Rob Matthews and John Imbrie at Brown University. His first faculty position started in 1992 at Purdue University. In 2001 Bob left Purdue to become a senior scientist at NASA in Huntsville, Alabama where he worked for four years. Bob’s last professional move was in 2006 to become a professor at the University of Nebraska, Lincoln. He remained on the faculty at UNL until his retirement in December 2017. His devotion to his science will live on in his many graduate students, colleagues, published works and consulting around the world.

Bob was also a poet and world explorer. He was a good-time guy, and always had stories of some trouble he raised wherever he was. The family is eager to read the memoir of these journeys that he had just come close to finishing.

Bob is survived by his daughter Rebecca (Oglesby) Poulin, and her husband, Jacob, of Winterport, Maine; his beloved granddaughter, Madaleina Poulin of Winterport; his sister Elizabeth Oglesby; his brothers Richard and William Oglesby; his family to whom he will always be “uncle Bob” Jaqueline Maasch, Emma Maasch, and Fox Maasch; his lifelong friend Susan Maasch and her husband Kirk; his best friend Ralph Zelaya; and his numerous lifelong friends and colleagues.

We encourage you to share your most beloved memories of Robert "Bob" here, so that the family and other loved ones can always see it. You can upload cherished photographs, or share your favorite stories, and can even comment on those shared by others.

Plant a Tree in Memory of Robert "Bob"
Plant a tree 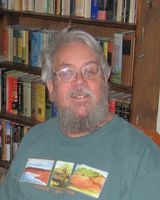