To share your memory on the wall of Blanche Johnson, sign in using one of the following options:

Blanche moved to Maine to teach school on Islesford as a recent University of Illinois at Cham... Read More
Longtime Seal Harbor resident Blanche Hoover Johnson 80, passed away April 10, 2021, surrounded by her family at an Orono healthcare facility.

Blanche moved to Maine to teach school on Islesford as a recent University of Illinois at Champaign-Urbana graduate. There she met Terrence Johnson, her soon to be husband. When they married in 1966 they moved to Seal Harbor and she transitioned to teaching at the Mount Desert Elementary school and raising their son, Michael Johnson who was born in 1968. She was a respected teacher of both 5th grade and junior high English.

She was born Blanche Cecilia Hoover February 25, 1941, to Antionette (Toni) Lane and Charles Everard Hoover. The third of 4 children (Alexandra, Michael and Catherine) she spent her early years in suburban Chicago including the towns of Melrose Place, Hinsdale, River Forest and Maywood. Charles Hoover graduated from Notre Dame University in 1929. Her mother’s family immigrated to Illinois from St. Petersburg, Russia when Toni was an infant. Blanche’s maternal grandfather and uncles ran a thriving bakery. She, however, never baked and instead developed a passion as a gardener.

Blanche attended St. James Grammar School in Maywood and Hinsdale High School in Illinois. After the untimely deaths of her parents, she lived with her aunt and uncle, Vera and John Collis, who happily included Blanche in their family of girls during high school and college.

She is survived by her husband Terry, son and daughter-in-law Mike and Jean, and granddaughter Olivia Johnson.

A memorial service will be held this fall aboard the Maine Seacoast Mission’s vessel Sunbeam. An avid reader, Blanche would like gifts in her memory be made to the Northeast Harbor Library, P.O. Box 279, Northeast Harbor, ME 04662. Condolences to the family may be expressed at BrookingsSmith.com
Read Less

We encourage you to share your most beloved memories of Blanche here, so that the family and other loved ones can always see it. You can upload cherished photographs, or share your favorite stories, and can even comment on those shared by others.

Posted Apr 15, 2021 at 10:39am
We are so very sorry for your loss Terry. Our hearts go out to you and your family. Sincerely, Dan, Emily, James, and Genevieve Burke
Comment Share
Share via: 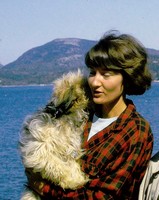