To share your memory on the wall of Jayne Lynne McEwen, sign in using one of the following options:

We encourage you to share your most beloved memories of Jayne Lynne here, so that the family and other loved ones can always see it. You can upload cherished photographs, or share your favorite stories, and can even comment on those shared by others.

Posted May 09, 2021 at 04:34pm
I am so sorry to hear about Jayne 's passing. Our MS mirrored each other for many years and when we would meet up at sporting events we would compare notes. She gave me pointers. I had a stroke at the same time that Jayne ended up in a nursing home. It has been so hard to watch her decline. God Bless.
Comment Share
Share via:
HS

Love's Journey was purchased for the family of Jayne Lynne McEwen. Send Flowers 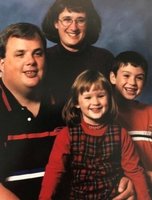