To share your memory on the wall of Malcolm Little, sign in using one of the following options:

Malcolm was born February 2, 1944 to Elizabeth (Perley) Little and Malcolm L. Little, Sr.
He played football at South Portland High and later at the University of Illinois. He joined the US Marine Corps where he served 3 tours in Vietnam as part of Force Recon and earned a Bronze Star and Purple Heart. He went on to proudly serve nearly 25 years in the Marines.
After discharge, he was hired as a Special Agent in Federal law enforcement and also worked as a reserve police officer with the San Diego PD and the Los Angeles County Sheriff Dept. and as armed security guard with Pinkerton. He successfully ran a moving company in San Diego.

Max continued his college studies in criminal justice and business while also caring for his mother who had Alzheimer's. After his mother's death in 1992, Max moved to Flagstaff, AZ where he began a new career with the Salvation Army. After training in disaster management with the Salvation Army, he worked with FEMA to aid victims of the Northridge, CA earthquake 1994.

Mac continued his graduate studies and earned a PhD in Criminal Sociology.
Later, Max met his wife Diane (Drexler) Little at the University of Arizona, Tucson, where he earned a second masters in Gerontology 2002 and were married in Flagstaff, AZ February 20, 2003.

Mac has been active in the American Legion, DAV, and Marine Corps League and other military organizations. From 2012-2014, Max served as commander of the Jewish War Veterans in Albuquerque, NM.

Mac has been a friend of Bill W for over 40 years. He also has been a lifetime member of the Masons and in Mensa. After moving back to Maine in 2004, Max and Diane participated as members of the Bangor Troop Greeters.

Graveside funeral services will be held 1 PM, Thursday, May 20, 2021 in Beth Abraham section of Mount Hope Cemetery, Severance Road, Bangor. Gifts in his memory may be made to Congregation Beth Abraham, 145 York Street, Bangor, ME 04401. Condolences to the family may be expressed at BrookingsSmith.com
Read Less

We encourage you to share your most beloved memories of Malcolm here, so that the family and other loved ones can always see it. You can upload cherished photographs, or share your favorite stories, and can even comment on those shared by others.

Posted May 17, 2021 at 09:18pm
Max Little was a sincere, enthusiastic, dedicated man of principle. These characteristics rippled into every part of his life’s involvement. I knew him as a member of the Jewish War Veterans, Steve Schiff Post 375, Albuquerque, New Mexico. Love and Blessings to Diane and the family.
J. Bunch
Albuquerque, NM
Comment Share
Share via: 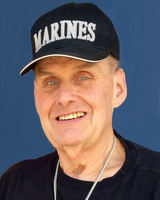