To share your memory on the wall of Joan Rosie, sign in using one of the following options:

Joan Frances Rosie, born February 17, 1927 in Bangor, Maine passed away Sunday May 17, 2021 after a short period of declining health. She was the daughter of Arthur E. and Jean (Monroe) Rosie.
Read More
JOAN FRANCES ROSIE
Bangor

Joan Frances Rosie, born February 17, 1927 in Bangor, Maine passed away Sunday May 17, 2021 after a short period of declining health. She was the daughter of Arthur E. and Jean (Monroe) Rosie.

She worked in the early 1950s in California for the First National Security Bank of Los Angeles. She returned to Maine and was employed for 21 years at The Merrill Trust Company as Executive Secretary to the President and Chairman of the Board. Following that, she worked for 20 years at Maine Information Systems, a computer center owned by three commercial banks in Bangor.

After retirement she volunteered as an accountant for the Cole Land Transportation Museum, United Way, RSVP, My Friend’s Place, and as a board member of the King’s Daughters Home.

Joan was a member of the First United Methodist Church and Beta Sigma Phi Sorority. Throughout her life she had a deep love of young children and animals. She traveled extensively with the YWCA groups each year and enjoyed trips to foreign destinations. Joan was an avid and expert knitter. She played an important role in family holidays and celebrations, taking a sincere interest in her grand nieces and nephews lives. For many years, “Santa’s gifts” were secretly hidden at her residence until Christmas Eve. On Christmas morning she was known to appear extra early with gifts and her traditional treats of doughnuts and fresh squeezed orange juice. We will miss her.

Joan was predeceased by her parents, her brother and sister-in-law, Robert & Venetia Rosie, and her niece Janie Rosie Crowell.

The family wishes to express their sincere thanks to St Joseph Hospice and Total Care Solutions of Holden where she received warm and loving attention.

Gifts in her memory may be made to the Bangor Area Homeless Shelter, 263 Main St., Bangor, the Bangor Humane Society , 693 Mt. Hope Ave., Bangor or the First United Methodist Church 703 Essex St. Bangor, ME. 04401.

Condolences to the family may be expressed at BrookingsSmith.com.
Read Less

We encourage you to share your most beloved memories of Joan here, so that the family and other loved ones can always see it. You can upload cherished photographs, or share your favorite stories, and can even comment on those shared by others. 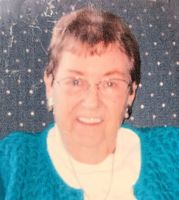