Obituary for Christopher F. B. Flynn 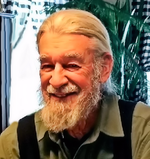 It is with profound sorrow that we announce the death of our beloved “Chris.” He passed away on Tuesday May 10th, 2022 at the age of 85, at the Bangor Maine Veteran’s Home. Chris was born October 7, 1936 in Boston Massachusetts. He was the first-born child of his parents, the late Dr. Carl M. Flynn and the late Anna S. Bourne Flynn.

Chris grew up in Orono. He attended schools in Orono and Augusta. He graduated from Lee Academy in the class of 1955. Chris was employed at the University of Maine throughout his teen years, serving in various capacities. Upon graduation he enlisted in the US Navy and became a Seabee. While in the Navy, Chris was assigned to many Ports of call; Davisville Rhode Island, Puerto Rico, Argentia Newfoundland, and Port Hueneme California, to name a few. Chris’ served with the Seabees in the mid-1950s. Our Country was immersed in the “Cold War.” The Seabees were responsible for major construction projects at various locations around the globe. Their mission was of vital importance to our Country. Chris’ electrical training was top notch and he totally became a valued and respected team player. Chris loved his Country. He took enormous pride in what he did and was infinitely proud to have been a United States Seabee. Upon completion of his four years with the Navy, Chris headed back into civilian life, armed with an Honorable Discharge, plus expertise in a field he both enjoyed and excelled at.

He was hired at the University of Maine, sharing his electrician skills with the University Crew. He made a home in Orono for his young family. From the U of M Chris’ career took him north to the Georgia Pacific Paper Mill in Woodland. At that time, he moved his Family to Carroll Plantation. He remained at Georgia Pacific for several years. Chris then moved on to the Great Northern Paper Mill in Millinocket. He was, by then, a Master Electrician. His work ethic, expertise, friendly and fun demeanor, made him a valued and much appreciated employee. He would remain at The Great Northern for the remainder of his career. Chris’ service to his Country did not end with his four-year stint on active duty. He dedicated his retirement years to volunteer service, along with his American Legion buddies, serving as Honor Guard for Northern Maine, assisting with burials of Veterans and Fallen Soldiers. Chris was an outstanding Honor Guard. He joined up with the NE Primitive Rendezvous folks as a retirement fun thing to do. “Black Smith” became his title, and his new hobby. He built himself an amazing shop. Chris had every tool known to man. His handiwork was spectacular. Finally, as were both his grandfather and his Father before him, Chris was a lifelong member of the Mason/Shriner organization.

Chris enjoyed a true love affair with the State of Maine. Even as a small boy, Chris knew exactly where he wanted to be. Maine was his forever home. He was truly a native son. He loved winter and was in his element with a new fallen snow. He would grab his skis and off he’d go. To watch Chris’ “take off” on a ski jump was a breathtaking and beautiful sight to behold. Skiing was his passion. Chris was a forever student of nature. He knew every tree, wildflower, and each and every outback road to everywhere and nowhere! He knew the birds by their calls, and the habits of the 4 footed wild critters. Chris was an avid hunter in his younger years. As the years marched on, as they tend to do, Chris immersed himself in studying Maine history, enjoying, appreciating and marveling at the sheer magnificence and beauty that exemplifies the State of Maine. Our Chris loved the ocean his entire life. He was among the second generation of those amazing men that went to sea. (His Grandfather and Uncles were Master Mariners sailing out of Maine). Chris, so like his cousins, was born with a love of the sea. Simply put; it was in his blood. Over time Chris became an accomplished sailor in his own right.


Chris was happily married for 65 years to Patsy Ann Bishop Flynn. They were high school sweethearts. Patsy was the total forever love of Chris’ life. He absolutely cherished “his lady,” as he so often fondly referred to her. Together they made a life, three beautiful children, and incredible memories. Sadly, Chris’ beloved Patsy passed in 2020, leaving Chris to carry on without her.

Above all else in this life, Chris adored his family. He was the quintessential family man. He is survived by his three children; Terry Worster and her husband Rodney, Christopher W. B. Flynn, Kelly Coffin and her husband Dale; his four grandchildren; Raven Flynn, Corey Sutherland and her husband Wayne, Matthew Coffin, Eddie Nicholas and his fiance Leann; his three great grandchildren; Lucien, Eva, and Tru; Left to cherish their memories of Chris, are his sisters; Jenifer Flynn Stillman and Sally Flynn Lounsbury. Chris always remembered with great affection, his nieces, nephews, cousins, and friends, many of them lifelong friends.

Chris Flynn was a much-loved man. He will be greatly missed, but forever remembered by all of us who loved him.

Chris’ Parents predeceased him, so too did his special Aunt, Frannie Bourne. Preceding Chris in death, some years ago, was his beloved little Brother, Howard Alvin Flynn. “Howie” remained forever close in Chris’ heart, each and every day of his life.

The Family wishes to thank the dedicated, amazing folks that cared for Chris both in the Machias and the Bangor Veteran’s homes. Those folks go over and above every single day.

Relatives and friends are welcome to call from 9:00-10:00 a.m., Thursday, June 2, 2022 at Brookings-Smith 133 Center St., Bangor where a celebration of Chris’ life will begin at 10:00 a.m. All are invited to share conversation and refreshments at the Family Reception Center of Brookings-Smith, 163 Center St., Bangor immediately following the service. Interment will take place in Carroll, Maine in the late afternoon on the same day.

The family suggests, in lieu of flowers, contributions may be made to the charity of your choosing.

Condolence to the family may be expressed at BrookingsSmith.com